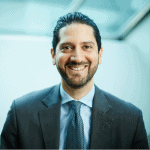 Zak Hydari  is the Chief Executive of Rasmala. He has over 20 years’ experience in private equity, mergers and acquisitions, special situations and business turnarounds. He has held leadership positions in various portfolio companies and implemented post-acquisition value enhancement strategies. He was previously Chief Executive of HBG Holdings, a special situations private equity investor. He has served in various other capacities including as Board and Executive Committee Member of Muscat Finance Company, a publicly listed company on the Muscat Stock Exchange; Co-Chairman of British Conservatives Abroad (Dubai and Northern Emirates) and Board Member of the Middle East Advisory Panel of the Corporate Finance Faculty, part of the Institute of Chartered Accountants in England & Wales. Zak holds an MBA from Cranfield University and was awarded The Distinguished Alumnus Award in 2018.

Martin Barrow has extensive knowledge of Asia, having worked in the region for 35 years with Jardine Matheson. After joining the Hong Kong operations in 1965, he served as President of the group’s affiliate in Saudi Arabia, Managing Director of the operations in Japan and Regional Managing Director of Hong Kong and China, before being appointed to the board of Jardine Matheson Ltd in 1989. Mr. Barrow is a director of Matheson & Co Limited, Ballie Gifford Japan Trust PLC, China Britain Business Council and the Hong Kong Association.

A career Banker with strong experience in UK and international markets including assignments in India, Sri Lanka, West Africa, Canada, Hong Kong and the United States, John Wright was recently appointed Chairman of Butterfields Bank UK. He was formerly Chief Executive of Oman International Bank for seven years, Chief Executive of the Northern and National Irish Banks in Ireland for five years, Chief Executive of the Gulf Bank in Kuwait and finally Chief Executive of Clydesdale & Yorkshire Banks prior to retirement. He has also served as Non Executive Director of banks in Oman, London and Bermuda and as Chairman of companies in Northern Ireland and in Scotland. He is a Fellow of the Chartered Institute of Bankers in Scotland and the Chartered Institute of Bankers in Ireland.